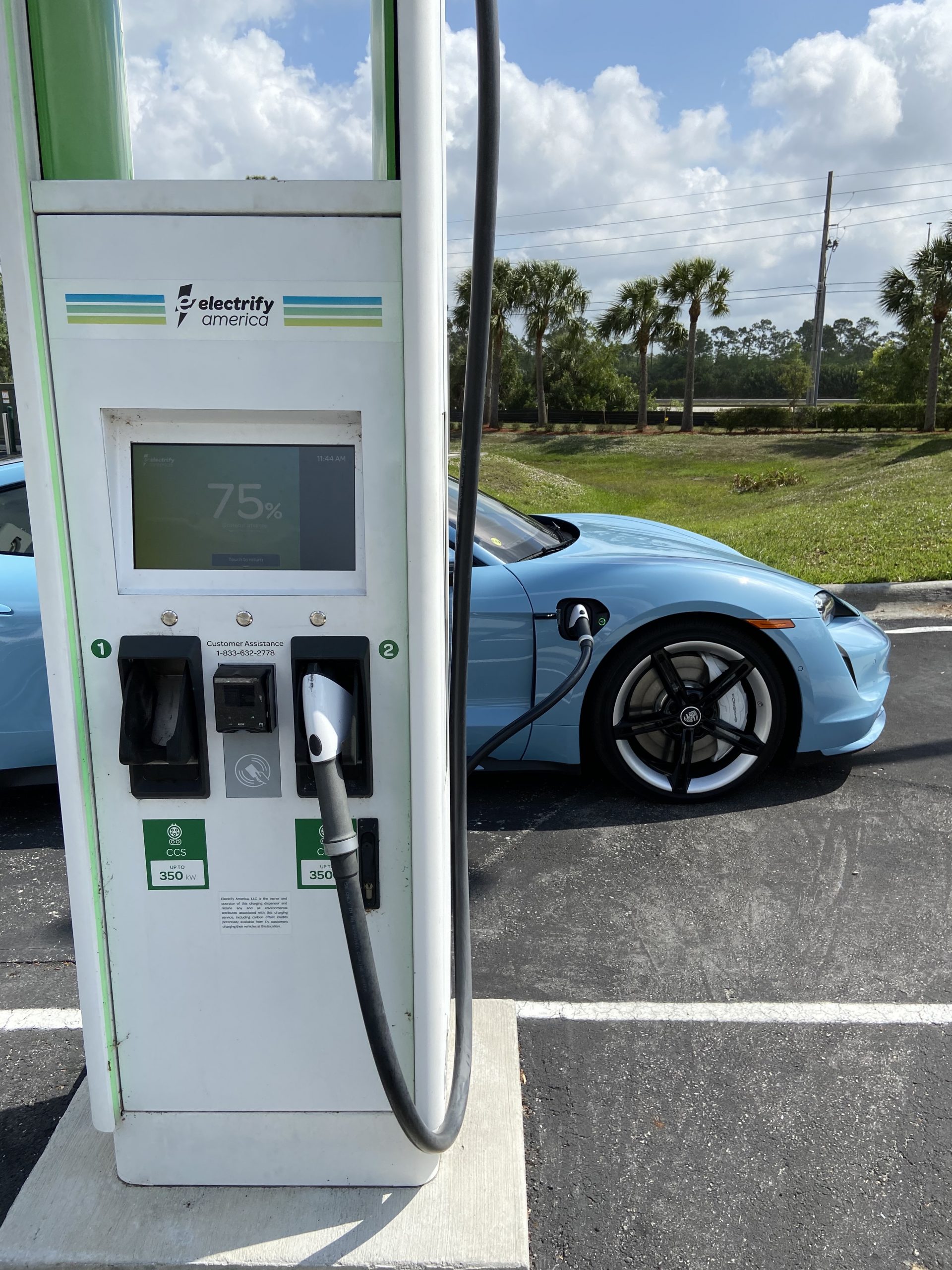 “It’s quiet, convenient, and my kids love it! After a couple of years of just plugging my car into the wall it takes a minute to remember where the nearest gas station is,” laughs Jocelyn Berner, a Tesla-owning Naples resident.

The benefits of electric vehicle (EV) ownership extend beyond the ease of “fueling up” by simply plugging in. By design, EVs produce just a fraction of the amount of harmful carbon dioxide gas released by gasoline-powered vehicles. Carbon dioxide is one type of polluting greenhouse gas that accumulates in Earth’s atmosphere, trapping heat and triggering changes to the climate that impact the quality of life in Southwest Florida and beyond.

So why aren’t we all driving EVs? Battery technology has not reached the point where the choice between gas and electric is a clear one. Currently, the average range per charge on an EV is upward of 230 miles, while most gas-powered vehicles can travel between 300-400 miles per tank of fuel. And there are not nearly enough charging stations to help you along the way if your EV battery starts running low. There are approximately 26,000 EV charging stations with 100,000 outlets currently, as compared to 120,000 gas stations with multiple fueling nozzles at each station.

Electric Vehicles are the future of transportation, with commitments from manufacturing giants General Motors and Ford to produce only EVs by 2035. For those new to EVs, understanding the charging mechanism is an important first step to adoption. EV propulsion requires: 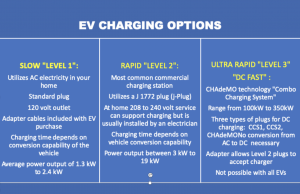 Most homes are built with 200 amp service, and most electrical outlets are 110 volt, except for the 230 volt clothes dryer and electric stove. Charging your EV with the 110 volt outlet would take about 10 hours, but using the 230 volt outlet would charge your vehicle twice as fast. Your vehicle’s plugs determine which charging station to use and the length of charging time.

A simple example illustrates the cost-effectiveness of driving electric. Electric vehicle batteries and a car’s distance capacity are measured in kilowatt-hours. Electric Vehicle Capacity is measured in kilowatt-hours traveled on a full battery charge. An EV range calculator app or your phone makes the math easy. Slow charging an electric vehicle at home would use about 3,000 watts (=3kW) and take approximately 10 hours. (Since AMPS = WATTS divided by VOLTS, the amp requirement for charging the EV would be about 27.) If you pay $0.13 per kilowatt-hour (i.e. per 1000 watts used in per hour) and you slow charge your vehicle with your household 110 volts for 10 hours, that would be 30 kilowatt-hours, for a total cost of about $4.00. If your vehicle can travel 100 miles on a charged battery (30 kWh), that would mean the “fuel” is costing you $.04 per mile. Let’s compare that to gasoline. If you pay $2.50 per gallon for gas and you get 25 miles to the gallon, driving 100 miles would cost $10.00, or 2 ½ times the cost of an electric vehicle.

How “green” an EV depends on how the electricity charging it is generated. An ideal grid would rely on renewable energy like wind, solar and hydro. While a large part of today’s electrical grid still depends upon coal-fired power plants which create carbon pollution, we are moving toward a more sustainable future. This New York Times article discusses power sources and electric vehicles. To determine the emissions of electric or hybrid vehicles you can use a website calculator that takes into consideration the fuel sources of local utilities. For many Florida residents, switching to clean and renewable wind power is just a click away. Check eligibility for partial wind power at no additional fee. (https://www.arcadia.com/renewable-energy ). Lean into the future – of green energy!