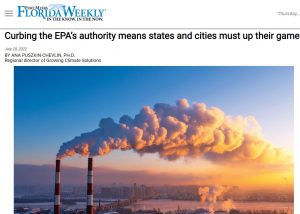 The Supreme Court’s ruling limiting the EPA’s ability to regulate greenhouse gas emissions was a devastating setback to the United States’ ability to address harmful emissions and mitigate the effects of climate change. But as some legal experts state, “It could have been worse”.

The ruling embraces the “major questions doctrine” limiting the federal agency’s ability to make policy on issues that have major economic and political significance. It does not, however, upend the 2007 landmark case, Massachusetts vs EPA, that granted the EPA the ability to regulate heat-trapping carbon pollution. This consequential but narrow ruling put it on Congress to legislate energy policies, rather than allowing the agency experts to develop the best approach; negating the EPA’s ability to comprehensively manage emissions at the level of a statewide electric grid. It essentially forces the EPA to limit its regulation to the level of the individual energy plant — what can be controlled by the energy plant regarding its operation—what is termed “inside the fence.”

While conservatives celebrate a ruling that curtails the regulatory powers of federal agencies, they should lament that this ruling actually quashes the ability to establish an effective and less expensive market-based approach to addressing carbon emissions. The Clean Power Plan, introduced during the Obama administration but never implemented, (then supplanted by the Affordable Clean Energy that was later rescinded), aimed to gradually transition the nation’s electric grid from fossil fuel to cleaner and renewable sources using interim and final emission performance rates that states would meet through a choice of approaches based on their energy portfolio. Retracting the EPA’s ability to establish these emission goals and limits thwarts the creation of a cap-and-trade market, making it much more challenging, cumbersome, and more expensive to comprehensively mitigate emissions.

The tools now left in the EPA’s toolbox, and there are still tools, are blunt instruments. The EPA can require increases in efficiency at plants that burn “dirtier” fuels, and cleaner standards for new plants, but that would only result in a small marginal emissions reduction. The EPA could also require the introduction of carbon capture technologies in new plants, or at existing locations, if they are technically and economically feasible at the location. But this patchwork of micro-scale improvements will not get us to the climate end-goals we need to limit warming to the 1.2 degrees Celsius established in the Paris Agreement. As the cost of renewable sources drops, the business case for cleaner electricity is motivating utilities to convert to clean sources. But retooling these facilities or building new ones is a very lengthy process as both the obsolesces of power plants and the permitting of new ones can take decades. The EPA can also continue to regulate vehicle tailpipe emissions, one of the largest emission sources. However, as more electrical vehicles enter the market and more machines generally adopt electric power, the need to ensure that the electricity fueling those motors, heaters and lights is generated from clean sources becomes paramount.

Constraining federal agencies’ regulatory actions, placing the onus on a partisan divided Congress that has not advanced strong environmental legislation in two decades, means that state and local governments must step up to address climate mitigation in more aggressive ways. The Regional Greenhouse Gas Initiative, a cap-and-trade system covering nine Northeastern states, provides a valuable model. Forging programs like these are extremely challenging, as the failed Transportation and Climate Initiative, a proposed cap-and-trade program around automobile emissions illustrates. States can facilitate clean energy production by supporting the roll-out of solar arrays, including roof-top arrays, through programs like net metering and third-party leasing of solar installations. Governor DeSantis’ veto of Florida HB 741, this past spring was an important victory.

Because local government is perceived as more connected and responsive to their constituents, positive climate actions can start locally, but only if voters demand these changes. If the recent Supreme Court’s decision on the EPA was to shift energy and climate policy from a federal regulatory agency to the people’s elected representatives, so too must climate policy emerge from elected leaders at the local and state levels. As voters, it is our responsibility to elect those with enlightened climate policies, especially since at the national level we lost an important tool in our toolbox. ¦