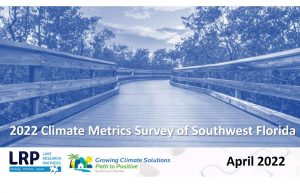 The 2018 Naples Daily News headline “Hurricane Irma a wake-up call on climate change for many Southwest Floridians” was a catalyst for initiating Growing Climate Solutions education and engagement program. After three years of operation, in April 2022 we sought to reassess indicators of climate awareness, mitigation aspirations, and solution preferences among SWFL residents. We commissioned California-based Lake Research Partners to replicate the survey and provide an in-depth assessment of changes in beliefs, attitudes, and concerns related to climate impacts and solutions.  The results were enlightening though somewhat alarming – data revealed overwhelming support for the right to clean water, clean air, and clean energy, but a growing polarization on climate attitudes among Democrats and Republicans. Overall, the level of concern and support for climate issues has weakened since 2018, especially among Republicans.

A majority of respondents support a range of policies that would reduce the pollution driving climate change and overwhelmingly believe that communities need to prepare for floods and droughts to minimize climate impacts. Nearly 80% of respondents think local, state, and federal governments should do more to protect natural coastlines and wetlands that provide essential storm protection from climate change and sea level rise. Respondents believe it is important to speak out about climate change, especially to family, friends, and elected officials. Interestingly, they reported feeling more empowered to advance solutions when their communities also engage in climate action. More than half the respondents would like to see their towns act on climate change. Thus, traction on climate challenges foments local government engagement on the issue.  Although a quarter of respondents do not want localities to engage in climate action, 56% do want local governments to address climate challenges, including actions that address its root causes and those that alleviate its impacts. This point is particularly salient in that local and state elected leaders commonly believe that voters support projects that address flooding and climate impacts, but not those that address the emission of greenhouse gases. Not true… our survey reveals that 85% of adults favor modernizing America’s electric grid, 70% of adults favor providing more incentives for people to switch to solar energy, 64% favor personal tax credits for electric or hybrid cars, and 61% favor passing laws for more efficient building and cars.

Given our region’s conservative demographic, it is not surprising that the majority of people believe that the private sector is most likely to advance solutions to climate change, including 67% of Republicans polled. In contrast, more than half of Democrats believe the Federal government will advance climate solutions.  The use of tax instruments to entice positive environmental behavior in the private sector also received strong support, with 74% of adults favoring charging corporate polluters a fee for the pollution they create, and 65% favoring the use of corporate tax credits to expand clean energy.

When compared to a similar poll conducted in 2018, the data clearly shows an overall decline in concern about climate impacts and decreasing support for climate action; likely attributed to the pandemic and current geopolitical conditions afflicting the economy, including supply chain issues, energy costs, and energy independence. The 2022 polling was conducted in April when the impacts of Europe’s energy reliance on Russia dominated headlines, and gas prices were rising steeply. In 2022, 41% of respondents believed that acting to prevent climate change would harm the economy, with 34% saying it would result in significant harm, compared to only 24% in 2018.  The percentage of respondents that favored prioritizing economic growth over climate action increased from 13% to 52% over the same period. Much of this change is attributed to men over 50 and Republican voters, with 79% preferring to prioritize the economy in 2022.

There is an increasing polarization in the extent of climate-related concerns, belief in a need for action, and optimism for solutions among residents of different political affiliations, with Democrats more strongly voicing climate concerns and supporting actions toward solutions than Republicans.   Today, 93% of Democrats say they are personally concerned about climate change, a slight decrease from 96 % in 2018. Sixty-two percent of independents expressed concern, though this number had decreased from 79% in 2018, and just 21% of Republicans voiced concern, down from 47% in 2018. Among all parties, concern about climate change declined from 71% to 53%, largely driven by the decrease in concern among Republican voters along with a 40% decrease in concern reported by younger men.

Younger men (those under 50), stand out in many places for their changes in views since 2018. They are more Republican today than in 2018 (50% identify as Republican today, up from 36% in 2018) and less Democratic (20% identify as Democratic today, down from 40% in 2018).  Though represented by a small number of residents in this survey, respondents under 30 that identified as Democratic decreased from 63% in 2018 to 15% today, while those identifying as Republican increased from 20% to 39%. The percentage who identifies as “something else” increased dramatically from 4% to 33%. Taken together, these changes present significant challenges. People who identify as Republicans are increasingly harder to engage with and persuade on issues of climate.

The slipping support for climate issues in our region comes despite increasing exposure to climate information.  Today, Southwest Floridians are more likely to say they have heard or read about climate change from news and media (74%), federal elected officials (56%), professors and educators (48%), and companies and business leaders (35%).  However, there is very little trust in any source of climate information, with only scientists and environmental organizations being trusted by more than half the respondents. Media outlets, including national and local newspapers, and national and local broadcast and TV news are not trusted by 60% to 70% of respondents. Moreover, less than 30% of respondents said that they trust elected officials at all levels of government. The bright spot is that all adults, irrespective of party affiliation, now trust local leaders with climate information a bit more than in 2018.

Common ground can be found in support for clean energy, with 80% of respondents supporting increased use of solar energy and more than half wishing to decrease the use of coal.  More than two-thirds of respondents support increasing the use of wind, natural gas, and nuclear power, with the acceptance of nuclear energy increasing substantially since 2018, especially among women, people under 50, and Independents. A strong majority of adults surveyed felt that “We can reduce the pollution that is causing climate change”, with 70% of respondents in agreement. A similar number also agreed that “We could address climate effectively, but our government is broken and can’t agree on how to do it”.  This cynicism is particularly noted among the younger demographic, among whom fewer believe in the efficacy of personal and collective action in reducing greenhouse gases today than in the past.  The disenfranchisement of respondents under 50 years of age seems counter-intuitive to the activism noted among teens and very young adults, demographics not represented in this survey.

Despite the appearance of a waning concern about climate change, respondents indicated healthy support for clean energy, protecting and strengthening natural climate solutions, and policies to hold corporations responsible for the pollution they release. These attitudes, along with the foundational values of protecting air and water quality, provide a solid footing on which to move forward.  While the world begins to recover from the initial onslaught of COVID and seeks solutions to the crisis in Ukraine – as well as its turbulent side effects – it is also imperative to press forward with climate action and to continue pursuing and implementing innovative solutions.